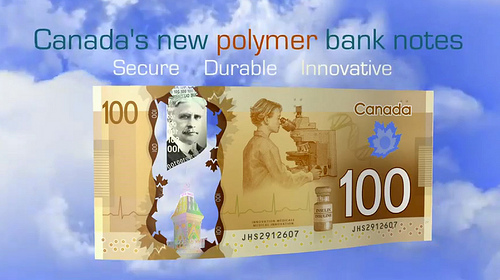 We use printed paper as money. How many characteristics of honest, sound money does our paper fulfill? By my count it fulfills two of the six; it is easily divisible and it is portable. 33% isn't so good, is it?
How about gold and silver. How do they stack up? I get 7 out of 7. Gold and silver fulfill 100% of the requirements for sound, honest money.
What does our constitution say about them? Don't know? Maybe it is time to read it.
Technology has advanced to the point where it is possible and viable to make "plastic" encased gold and silver money which would look very similar to the paper notes we currently use as money but with one very big difference. Federal treasury notes are nothing but paper with a little ink on them. Their value is merely differentiated by the numbers printed on them and the laws requiring their use. A ten dollar bill is pretty much the same as a hundred dollar bill but has an added zero, yet they have no real difference in their intrinsic value.
In stark contrast, gold and silver plastic notes would have a stated, verifiable and visible weight of gold and silver actually embedded in the notes themselves. Based on today's gold prices(12/12/08 $827 per oz. or 480 grains) a gold-filled note worth about 1 dollar would contain roughly 1.72 grains, lets make it a 2 grain gold note for simplicity. 9 grains would be about $5 and 17 grains would be about $10. And so on. Probably would be much simpler to make a 2 grain, 10 grain, 20 grain, 40 grain and so forth. The larger value notes would switch to grams. 1 oz. = 31 grams. So a $100 note would be about 4 grams. Prices would no longer need to be in dollars but could be in grams or grains of gold, instead. Smaller amounts could be taken care of by silver and copper coins just like we did in the U.S. for a couple hundred years until 1964.
When you go to the store to buy groceries, prices could be in gold grains, grams, etc.
Now you are probably saying, "Well gold prices fluctuate wildly so how would this work"? That is true they do. Question is why? For one thing gold isn't used as money so it's value in relation to money is constantly changing. If gold was again the money of choice it would be far more stable. The other factor causing the difference in gold and "money" values is monetary inflation. Paper money is cheap, easily created and counterfeited(biggest counterfeiter is the government and banks) and is constantly being printed(or created digitally) out of thin air. This steadily drives down the value of paper money and destroys its purchasing power. Gold has held its value throughout history and has always risen in value against fiat(backed by nothing of real value) currencies.
The only role of government, if it had any, with a new plastic gold-filled currency would be to monitor the manufacturers to ensure the notes contain the stated amount of gold in them. Of course private companies like U.L. laboratories or Consumer Reports could also do it. And no doubt they would do a far better job than government ever could.
Burning the note would allow anyone with a scale to do the same thing to make sure their note actually contained the stated content of gold printed on its face. These notes would destroy the power of governments, and their real owners the banks, to steal from you by printing up more and more paper money as has been going on in the U.S. since 1913. The biggest tax you pay is the inflation tax. Didn't know about that, did you? Well if you are a product of the public indoctrination system that is by design. Why would they teach you they are systematically stealing your hard earned wealth? Because you might actually get mad and then do something about it, right? That would be incredibly foolish on their part.
So take a stand against tyranny and join the fight for freedom by turning some of your fiat into honest money- gold and silver. And look into the idea of creating easy to use gold or silver filled currency that can't be printed out of nothing like our current debt based, statist "money".